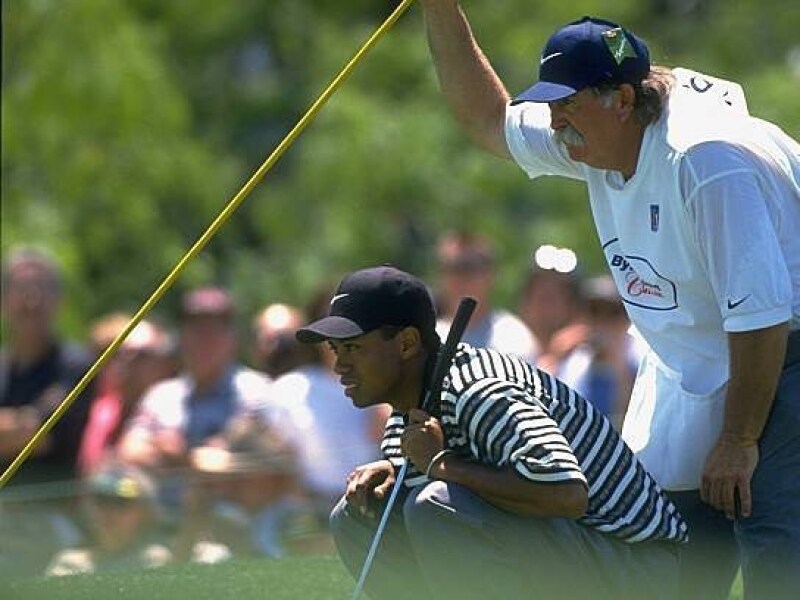 There is a new Bill Murray movie and, since you probably are not hearing about it until now, it is called “Loopers: The Caddie’s Long Walk.” He does not have a demanding part — he narrates the 80-minute long documentary and makes a short on-camera appearance — but it is sure to be regarded as one of his finest films.

There have been plenty of them, such comedy classics as "Ghostbusters" and "Groundhog Day," as well as “Rushmore, “Mad Dog and Glory,” “Scrooged,” “The Razor’s Edge,” “Tootsie” and on and on, now 50 or so and counting.

But in certain circles — populated by people who know the difference between a sand wedge and a sandwich, and who watch that annual televised gathering of golfers and celebrities in Pebble Beach, Calif. — Murray is almost as famous a golfer as he is a movie star.

He learned the game (and caddying) as one of nine kids growing up in Wilmette and walking such North Shore courses such as Peter Jans, Indian Hill and Westmoreland. He used some of his youthful golf experiences to create what many feel is the the defining role of his career: the gopher-obsessed groundskeeper Carl Spackler in 1980’s “Caddyshack.”

There is no one quite like Carl in “Loopers,” but we do get a cast of colorful characters and a marvelously entertaining and thoughtful film. (“Loop” is another term for a round of golf, thus is “looper” another term for caddy.)

Directed by Jason Baffa, it is beautiful to look at, giving a travelogue of some of the world’s great golf courses. But it also provides a lively history of golf and caddies, from their hard-drinking, raucous beginnings to their serious (and lucrative) contemporary professionalism. It also clearly explains why caddies are “not just the people who carry the bag,” but as Murray puts it, a “secret integral part of the game.”

It is highlighted by vintage archival photos and film and a number of surprisingly animated interviews with notable pros (Ben Crenshaw, Lee Trevino, Curtis Strange, Fuzzy Zoeller); club and pro caddies who have been at it for decades and, in some familiar cases, generations; and smart journalists such as Rick Reilly, Michael Collins and Ward Clayton.

It does not shy away from such touchy subjects as the caddie history of the Masters Tournament at Augusta National Golf Club, shadowed as it has been for decades by racism. To listen to former Masters caddies talk on camera is to be unhappily enlightened.

But most of the film’s stories are uplifting, such as that of Greg Puga. Born poor in East Los Angeles, he started his high school golf team, caddied at local clubs, played well enough to win a Mid-Amateur championship and thus qualify to play in the 2001 Masters.

We get a fine happy local jolt with the story of amateur golfer Charles “Chick” Evans Jr., who in 1930 started the Evans Scholars Foundation (wgaesf.org), a program that has since provided nearly $400 million to more than 10,000 caddies, providing full housing and tuition scholarship at 18 universities.

At its heart, “Loopers” is a buddy movie, exploring primarily the relationships that form between caddies and the pros, but about also about caddies and the lesser skilled among us.

The icy Nick Faldo is downright warm and fuzzy talking about his caddie Fanny Sunesson, a rare female member of the profession. We see such well-known pairings as Phil Mickelson and “Bones” Mackay, and Jordan Spieth and former grade-school math teacher Michael Greller. More interesting is hearing from some of the keepers of Augusta National’s secrets, such as Nathaniel “Ironman” Avery, who guided Arnold Palmer, and Willie Peterson, who caddied for four of Jack Nicklaus’ Masters wins.

The most poignant pairing is that of Tom Watson and Bruce Edwards, which lasted over 20 years of Watson’s stellar career, until Edwards was felled by ALS.

From most unsavory roots, caddies have come a very long way. They were once rough and tumble types, often given to alcoholic refreshment, and operating on the philosophy of “show up, keep up and shut up.” They were banned from clubhouses and treated poorly. Now they are far more straight-laced — and why not? Their general deal is a regular fee embellished by 10 percent of their pro’s winnings. With purses swelling astronomically, some caddies earn more than $1 million a year. (Bill Murray made $3 a bag when he was a looper as a teen).

The film will appeal to those who don’t know a five iron from a five-dollar bill. In limited release, it opens Friday the 7th at Marcus Addison Cinema in Addison, Marcus Gurnee Cinema in Gurnee, AMC River East 21 and REGAL in Round Lake Beach.

It has been getting a lot of praise:

From Golf Digest: “[We wish] ‘Loopers’ could be a series with each vignette an episode. Better yet, with striking panoramas of St. Andrews, Pebble Beach, Bandon, Carnoustie and other world-renowned courses, ‘Loopers’ is reminiscent of the BBC’s ‘Planet Earth’ series, educating while aesthetically captivating.” And it has won best documentary awards from the Cleveland International Film Festival and Newport Beach Film Festival.

And it’s got Bill Murray.

Twenty years ago, Murray wrote a book, his only book, and it was about golf.

It was “Cinderella Story: My Life in Golf” (Doubleday), written in collaboration with George Peper, editor-in-chief of Golf Digest magazine.

We talked about it then in — where else? — the Billy Goat Tavern.

This is the place that inspired the famous Murray-John Belushi 1978 “Saturday Night Live” skit with its “cheezborger, cheezborger / no Pepsi, Coke / no fries, chips.” That routine helped the Goat, along with its “Cubs curse” and down-to-earth ways, become popular and famous.

“People have been asking me to write a book for some time,” Murray said that afternoon. “There are all these comedians who’ve written books about their lives. I didn’t want to do [that]. The idea of a book about golf appealed to me. But I didn’t want to take myself too seriously and I didn’t want to presume to be an authority on golf."

What he created was an anecdote-laden treat. In reviewing it, I wrote that, “His love for the sport touches almost every page.”

You can hear that affection in “Loopers.” As we ogle one of the planet’s great courses, we listen to Murray say, “To acquire a local caddie at a foreign golf course is to have an ally in a battle against the elements, the golf course and life itself.”