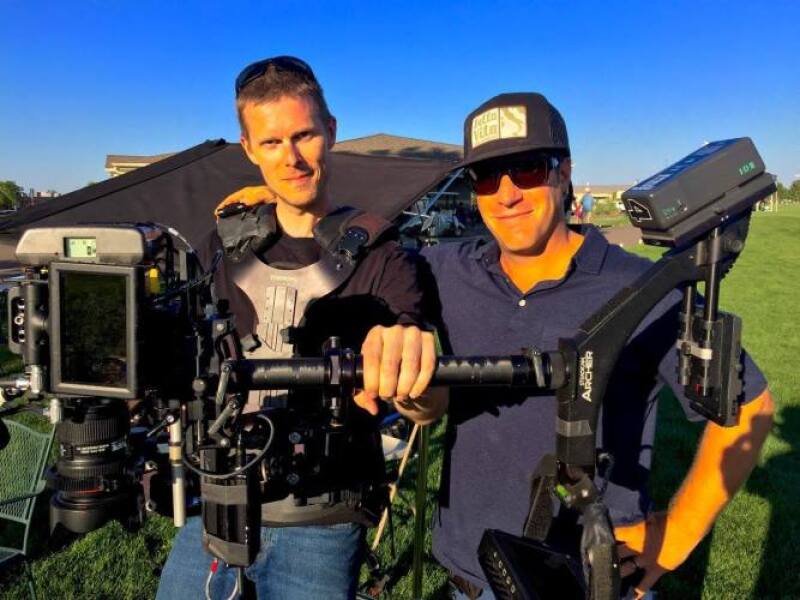 As children so often do, Jason Baffa’s son cut to the chase when he asked his father if he was ever going to finish that golf movie he was directing.

“You’ve been working on it all my life,” the six-year-old said pointedly.

Well, almost all his life. The movie, “Loopers: The Caddie’s Long Walk,” was actually four years in the making and finally hits theaters nationwide on Friday.

The exquisitely-filmed feature length production, which is narrated by Bill Murray, looks at the profession from all angles – from caddies at local clubs like Ballybunion and Bandon Dunes to the men who tote the bags for players on the PGA TOUR.

It’s an interesting mixture of characters and caddies but one thread runs throughout. All the men and women featured in the documentary love their jobs and making the people they caddie for improve so they can enjoy the game.

Baffa took time recently for the conversation below with PGATOUR.COM. A list of theaters showing the film can be found here.

PGATOUR.COM: What made you want to get involved with this project?

BAFFA: I think the idea of this visual journey and golf and the big theme in all their projects has sort of been people's connection to the environment, and the positive you get back out of a life spent enjoying the outdoors. So, I'm naturally kind of interested in that type of thing. But what really hooked me on this was that idea, and you've got to remember, this was now four, five years ago. So, I feel like media's giving caddies even a little more attention now, but this relationship -- and I grew up playing a lot of golf, but I grew up playing all sports. … And I thought about it as we were discussing it, and the guys were pointing out much of what ends up in the film is this athletic relationship where someone's inside the ropes, but they have so much input as far as strategy and emotional help and whatever that player needs. And I couldn't really think of any other relationship like that in athletics. Some people mentioned boxing and maybe having the person in your corner, but they're not in your ear, and it's a little less than sort of this close-knit relationship. So that was the thing that really grabbed me, and the idea that we could explore that in a feature film, sort of for the first time. And I'm always attracted to things, I'm like, ‘Ah, I don't think that's been done.’ You know?

PGATOUR.COM: You say you played golf growing up. Did you ever caddie?

BAFFA: I didn't, but I played quite a bit. My father and my uncle, my late uncle, were passionate golfers when I was growing up, so I would get out with them quite a bit. And then as I got older and other sports started taking up time, it got harder to play. … But I've always loved the game, and I always really loved watching with my dad. It was something, we'd get out early on Sunday and come back and watch whatever tournament was finishing. I think that was sort of a neat experience to then get to sit down with a Tom Watson and Ben Crenshaw, because these were the people I was watching, and we were watching together. So, it was fun to have it come full circle in that way.

PGATOUR.COM: So how did you narrow the focus to the caddies that you spotlighted? How did you uncover these people?

BAFFA: It was a team effort. One of the producers, Clark Cunningham, his role was very much finding the off-beat stories, like the Special Olympics story, and getting in touch with Greg Puga. And then Ward Clayton, who wrote ‘Men on the Bag: The Caddies of Augusta’ -- he was so connected with history, and then also the modern pro players. And Ward really helped a lot in connecting us with people. … It was a long journey, four-plus years, maybe, by the time we got everything we needed, but it truly started with just casting a wide net. We went to the Masters, I think it was the 2015, and that's where we found Jerry Beard (the local caddy on Fuzzy Zoeller’s bag when he won the Masters) and a few other people. And we just started interviewing anyone who would talk to us. And then that would open a door, ‘Oh, you got to talk to this person or that.’ And we took all that and then started looking at it and piecing together what we thought made sense, and then building on that. So, it was a very broad, interesting approach. I don't know if I'd recommend it to other filmmakers. You have to be very patient, but in the end, I'm happy with what we came away with.

PGATOUR.COM: Bill Murray is the narrator of the documentary. How did he come to be involved in this project?

BAFFA: If you think of a name that people know and love, that we know that they love golf and their film portfolio has golf in it, how could we not get him? And everyone said, ‘Well, you're insane, because he's impossible to get. So that sort of began this ongoing thing. Luckily, we had a lot of time where we kept trying and trying, and we finally caught up with him, it was Chicago. I guess maybe it was the BMW (Championship), but we were at Chicago and he was in the pro-am. And that's when we were able to get the little bit of interview with him and just make the contact and say, ‘Hey, this is what we're doing.’ And I think via that we probably got a number, because he doesn't have the agent or whatever, so it might have been the lawyer's number or his brother, I don't know.

And then we had to keep calling like, ‘Hey, do you think Bill would do it? Do you think Bill would do it?’ And we finally heard, the good news is, yeah, he's interested. But the bad news is, yeah, he's interested. You may have to wait a long time. And we did. We were just patient, and we kept bugging them. And as he is in his amazingness, you get a text saying, ‘Hey, can you guys fly out tomorrow? I'm ready.’ And that's kind of how we did it. I flew across country, and we got together. You asked me who were memorable people to work with, well obviously, I've looked up to him since I was a kid, so that was phenomenal. And his love for golf, he came with opinions, and creativity, and worked on the script and really brought his perspective to it. And that's more than we could have asked for.

So, I'm really glad. And I think now listening and looking at it, he almost approached it like he's caddying the viewer. He's not there trying to upstage the movie. He just kind of holds your hand and takes you on a loop, and I love that. I just love it.

PGATOUR.COM: After four years, you must be so glad to have the finished product in front of audiences.

BAFFA: It's an interesting feeling. There's a little bit of this void, because it's been such a huge part of your life, but then you're getting feedback from the people who are now getting to experience it for the first time. And in a way, that's surprising, because these stories I now know so well. So, it's nice to get feedback from someone who sees it fresh.

It's a process, for sure. I got asked at the film festival -- it was an interesting conversation just a sort of creative to an audience member, and they said, ‘Well, how many different versions of this film did you make, did you cut before you said, 'This is the one.'’ … What popped in my head is, I was like, ‘Look, I like to cook. I make an Italian Bolognese on Sunday. And when you're making that sauce, you try it as you go, and maybe it needs a little more salt, or maybe it needs a little more spice or whatever. And eventually you get it to the point where you're like, 'Yeah, this tastes great. I'm ready to share this with my friends.’ So that's, I guess, a little bit of how it is making a documentary. You just keep tweaking until you're like, ‘Okay. It's ready to serve.’

There's one really neat thing about this film that I'm starting to get a bigger picture on as I'm talking to audiences after they see it, and I don't know if we even knew it going into it, but all these people we talked to and worked with who are in the caddying profession, they love being there for their player. They love kind of this service industry idea of, "I'm here to make them better." And I think that's a beautiful just sentiment for life, because we're so me, me, me, social media, selfie, and here are these people who literally love what they do. And what they do is try to help someone else be better. And I think that's kind of a beautiful thing, and I'm glad it's resonating with audiences.

PGATOUR.COM: The film has close to 400 unique archival assets. You said finding them was a bit like going on an archeological dig, but the old photos and video really add a lot to the film.

BAFFA: I love history and how what came before us influences us now, especially with sports, and one of my favorite edits in the movie or moments is when we go from the old eight-millimeter news reel of St. Andrews and the edit takes you to the exact image today. But it hasn't changed. The media's changed, but what you're seeing hasn't, and I just always feel that that's so powerful. I really love that and how it connects us in the present to the past.

PGATOUR.COM: The movie is getting a lot of good press and accolades. That must be very gratifying.

BAFFA: We've won best documentary at two of the four festivals we've done to date, so that's pretty cool. The Chicago press just dropped a headline I can forward. Ward sent it to me. The opening line of the review is something like, "Bill Murray's role in this film is small, but this may go down as one of his greatest movies ever." Which I was just flabbergasted by. So, this film, for whatever reason, and granted a lot of these people, they have a love for golf and that helps. They're hungry for some new stuff, so that's good. But it really does seem to be connecting with people. It makes people laugh. It makes some people cry, and the old rule in filmmaking is when you do that, you have something that's pretty special. So, I don't know. I'm really kind of curious and exciting to see how this all plays out. I could never be one to assume or suggest one or another thing, but I know a lot of love went into it.